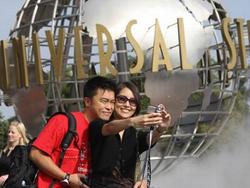 The statistics released by the California Travel and Tourism Commission (CTTC) shows the number of tourists to California from Chinese mainland has witnessed a rapid increase in recent years and they preferred to shopping during the travel.

Caroline Beteta, chief executive of the CTTC, said there are some 250,000 to 300,000 Chinese mainland tourists to California every year and the number saw a double-digit growth rate. It is expected such growth will keep in the coming five years.

The CTTC opened tourism promoting offices in Shanghai and Beijing one year ago, said Caroline, and China is the world’s fastest-growing country in the number of outbound tourists.

In addition, Carol Martinez, spokesperson from Los Angeles Convention and Visitor Authority said Chinese mainland is the Los Angeles’ important tourism market and many tourism attractions in the city have set up Chinese boarding service.

Pierre Gervois, CEO of China Elite Focus, a Destination Marketing agency based in Shanghai, said that “The new generation of Chinese tourists coming to California is interested in shopping, Golf, and more and more by wine tourism. California wine is a big asset for the state”.

Kathryn Smits, director of Beverly Hill Conference and Visitors Authority said she contacted many Chinese tourists and their consumption is characterized by shopping.

“They prefer to buy expensive luxury goods, but they also like to buy some useful items, such as vitamin tablets, and others,” said Kathryn.

Our blog has had the ple 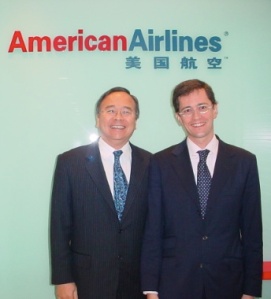 asure to obtain an exclusive interview from Mr Victor Lee, American Airlines Greater China’s Regional Director, based in Shanghai. As the United States are one of the favorite destination of the Chinese travelers for both business and leisure, we wanted to know more about the strategy of American Airlines in China.

Since  April 2006, American Airlines operates a daily flight from Shanghai Pudong to Chicago O’Hare. In 2010, a new flight route will be open from Beijng to Chicago, to give more options to the Chinese travelers.

“The expansion of our network to China is a profoundly significant event that strengthens American as a global competitor and further enhances Chicago as one of the nation’s foremost international gateways,” said Mr Victor Lee. “With daily nonstop service between Chicago and Shanghai, China’s largest and most dynamic business center, we will provide broad new access to China for tens of thousands of passengers and shippers in cities large and small, stimulating the market and building strong new commercial and cultural ties between our two countries.” Mr Lee added.

For now, the main part of the Chinese travelers from Shanghai were business travelers, but, with the new recent US visa policy opening the doors to Chinese tourists groups, and the number of rich Chinese citizens in Shanghai, American Airlines is expecting a fast growing on this flight route, specially for the First and Business class Chinese travelers.

The new  Business Class offers ergonomically-advanced seat design. The new, highly adjustable, lie-flat seat allows passengers to customize the setting to their personal preference. Business Class Chinese passengers also will have convenient access to a number of amenities, including gourmet food, in-flight entertainment and power ports in every seat.

“American Airlines wants simply to offer the best service between China and the US”, said Mr Lee.

According to China Elite Focus analysts, it is crucial for the airlines to market their brand in China as luxury brands rather than to try to be the cheapest airline. American Airlines has choosen the appropriate strategy when they insist on the quality of their service and want to be seen by the Chinese travelers as a luxury brand among the other airlines.

Also, American Airlines has partnerships in the US with  more than one thousand hotels, resorts that gives to Chinese travelers a wide choice of business and leisure destinations in the US.

Hundreds of thousand of affluent Chinese tourists enjoying beautiful American landscapes, eating good food, discovering the americans warm welcome… and spending a lot of dollars.
That’s the vision that some Utah tourism-industry executives have, now that China and the United States have an arrangement designed to let Chinese groups travel for fun throughout America. The vision includes someday soon topping the record 320,000 Chinese visitors to the United States in 2006.

“This is a dream destination for the Chinese,” said Keith Griffall, chief executive officer of Western Leisure Inc., a Midvale-based group tour company. “They really haven’t had that opportunity to come here before, and the numbers could grow dramatically. Three hundred and twenty thousand sounds like lot of people, but it could get into the millions easily, and we are looking to get just a little bit of that pie.”

Western Leisure is taking advantage of a memorandum of understanding between the two countries that was signed in December. The agreement provides “approved-destination status” by the Chinese government and permits Chinese group leisure travel to the United States. Travel restrictions have been loosened in recent years for the Chinese, coinciding with a growing number of middle-class Chinese being able to afford long trips. Chinese individuals and groups with visas can travel to the United States for business and education, but Chinese regulations of its travel agencies restrict group leisure trips to nations that have a bilateral agreement with the Chinese government.

Griffall, who has served on the Board of the Travel Industry of America for the past six years and is past president of the National Tour Association, said the growing incomes in China are creating a huge potential market for tourism. “If you look at the big picture, the size of the population and the number of people able to travel now because of the money they’re making, you can look and it will appear kind of overwhelming,” he said. “Not all of them can travel, but the fact is that more can, and more and more will be able to.”

Fusheng Wu, associate professor at the Asian Studies Program and director of the Confucius Institute at the University of Utah, believes a lot of affluent and upper-middle-class Chinese want to visit the United States. He has Chinese friends who have traveled to Europe for recreation because of a travel memorandum between China and the European Union.
“I know a lot of people who want to come to the United States just to take a look, because the United States, in a lot of Chinese people’s minds, really represents the ultimate achievement of the Western civilization. There’s a lot of interest in coming to the United States, and lot of people have the financial resources to do that.”

When they come, they probably will spend big. The Travel Industry Association estimates that in 2006, the typical Chinese visitor in the United States spent more than $6,000 on a trip, compared with the typical $1,000 per stay for domestic travelers. Total spending by the 320,000 visitors in 2006 was more than $2 billion, according to the U.S. Commerce Department. That included $1.6 billion on travel products and services and $431 million to U.S. carriers. As said Pierre Gervois, CEO of China Elite Focus, a marketing agency specialized on the affluent and very affluent Chinese outbound tourists “This new wave of Chinese tourists coming to the United States wants to discover the “real” America, with beautiful landscapes and the authentic America”
Leigh von der Esch, managing director of the Utah Office of Tourism, said the office has no firm or current numbers on Chinese visitors, but most
their visits have been business-oriented. She said the office will try to ensure that the products being marketed to the Chinese contain lots of information about Utah. “The first thing we want to do is familiarize our product with the Chinese tour operators so we’re ‘top of mind’ within what they’re selling,” she said.