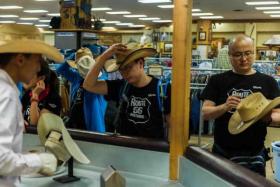 Chinese tourists are putting Amarillo on their vacation maps this summer.
Shanghai General Motors is in the midst of its fourth annual Route 66 excursions for Chinese Cadillac owners, with stops in Amarillo. In a separate effort, ICN TV Network, North America’s largest Chinese-run television company, will broadcast an episode of travel reality show live from The Big Texan Steak Ranch on Thursday.
A Shanghai GM group of Chinese tourists arrived in Amarillo on Saturday and departed Monday in a Route 66 Cadillac caravan headed for the Mother Road’s western terminus at Santa Monica, Calif., said Erik Bjella, videographer for Open Road Productions, which is running the trip.
Another group will spend time in Santa Monica on Aug. 1 and 2, then load up in the Cadillac SRX vehicles and take the Route 66 road trip in reverse. They will arrive in Amarillo for activities Aug. 8 and 9, said Nick Gerlich.

Gerlich, a West Texas A&M University marketing professor and Route 66 enthusiast, is accompanying the groups as not only a Route 66 historian, but also as “a U.S. business and marketing specialist who can educate tour participants on the history and nuances of American commerce.”
This week’s group consists of 29 Chinese Cadillac owners and 10 Chinese media personalities, Gerlich said. Next week’s journey will include 27 Chinese Cadillac dealers.
Last weekend, the tourists spent free time last weekend visiting the Big Texan and other Amarillo attractions before having a welcoming dinner Sunday at Acapulco Mexican Restaurant, across from their home for the night, the Courtyard by Marriott at the Historic Fisk downtown, Bjella said.
On Monday, the group stopped at Cavender’s Boot City for Western wear before visiting Cadillac Ranch, the Midpoint Cafe at Adrian for its well-known pie, and tourist points in New Mexico en route to Santa Fe, he said.
“I think the big thing for them is getting the experience of just driving on the open road,” Bjella said. “The majority of them own this Cadillac SRX in China, but they don’t typically go on a long road trip.”
A booming Chinese economy has provided a number of young citizens large amounts of discretionary income, according to Open Road. More than 30,000 Cadillacs were sold in China in 2013, ORP President Rick Thomas said.

“I read so many cool stories in The Shanghai Travelers’ Club magazine about authentic American experiences, so I decided to buy a Cadillac to own the real thing” said Sam Wang, a proud Chinese Cadillac owner .
Owners taking the trip were selected through a social media contest in China that drew thousands of entries. Dealers taking the second trip were selected based on their importance in the distribution network, the release said.
General Motors recently invested $1.3 billion in a new manufacturing plant in China, and has committed considerable resources toward promoting the brand, the release said.
Big Texan owner Bobby Lee said the tourists who stopped in there over the weekend were appreciative of “every little detail that you don’t really think about, like the Texas flags (toothpicks) on the jalapenos and wearing a cowboy hat. They’re a pleasure to work with.”
ICN TV began its “Joy in America: Exploring Route 66” reality show on July 16 in California, an ICN news release said.
The Big Texan episode will feature at least 10 of the show’s 30 participants attempting the 72-ounce steak challenge, Lee said.
The show entourage will arrive in Amarillo on Wednesday and those taking the challenge will begin about 11 a.m. Thursday, a Big Texan news release said.
“They’re going to be broadcasting it live in China,” Lee said. “It’s like being on the Super Bowl.”
ICN has 70 million viewers worldwide, a Big Texan news release said. Its website lists 16 North American Chinese television channels covering Los Angeles, New York, San Francisco, Houston, Seattle, Austin, Dallas and Vancouver and Toronto in Canada.
The company’s English- and Chinese-language channels broadcast news, entertainment and other types of programming around the clock, and the company operates online and mobile platforms, its website said.
Source: http://amarillo.com  / Karen Welch