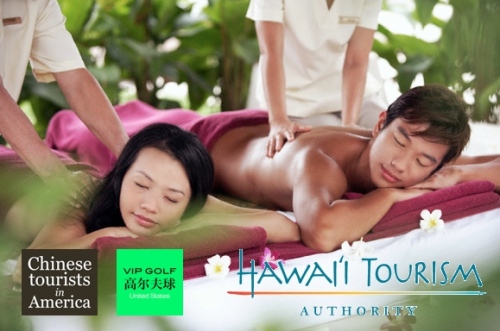 Reaching out to China’s booming tourism market will be a priority for Hawaii Governor Neil Abercrombie during the three-day China-US Governors Forum in Beijing.

Hawaii Tourism Authority (HTA) President Mike McCartney and other tourism officials will join Abercrombie – on his inaugural trip to Asia – at the forum on Oct. 19, 2011.

A good relationship between China and the United States will not only stimulate Hawaii’s economy but also promote cultural understanding, Abercrombie said.

Hawaii already has sister-state relationships with Guangdong and Hainan provinces.

“Chinese culture and traditions have long since become intertwined into our own local culture, building on Hawaii’s longstanding and very special relationship with China,” Abercrombie said.

Guam Governor Eddie Baza Calvo, who will also attend the forum, is also interested in promoting the US territory as a travel destination for Chinese people.

At the US-China Governors Forum in Salt Lake City in February, he discussed with Zhejiang Party Secretary Zhao Hongzhu the potential for increased tourism from China if a visa waiver program is approved.

“US governors and the (Barack) Obama administration understand how critical it is for the nation to build economic alliances with China,” Calvo said.

Zhao told Calvo he intends to encourage residents of his populous province to visit Guam, according to Calvo. Zhao mentioned that many Zhejiang residents currently vacation in Singapore, which is a six-hour flight, whereas the flight to Guam is only four hours.

The number of Chinese tourists in Hawaii has jumped significantly since the signing of the 2007 Memorandum of Understanding between the US and China to allow Chinese vacationers to visit the country.

The average Chinese tourist spends $349 per person each day, according to data compiled by HTA, whereas Japanese visitors spend an average of $261 each day.

At the upcoming three-day forum, McCartney will join Abercrombie for a meeting with Shao Qiwei, director of China’s National Tourism Administration.

The two will also meet officials from China Eastern Airlines and the US embassy, as well as representatives from the airline and travel industries.

HTA works closely with its overseas contractor Hawaii Tourism China, which has offices in Shanghai and Beijing, to promote Hawaii to Chinese travelers as a vacation and business destination, according to McCartney.

HTA estimates that this regularly scheduled flight, on Tuesdays and Fridays, will provide the state with $60 million in annual visitor expenditures.

Before traveling to the US, Chinese travelers are required to obtain a tourist visa. When the Visa Waiver Program was introduced for tourists from South Korea in 2008, the number of travelers from South Korea to Hawaii increased significantly, according to McCartney.

McCartney said the state has been working hard to support efforts that could help expedite the process for obtaining travel visas.

“We understand the visa process for Chinese visitors is long, and we hope to ease it,” McCartney said. 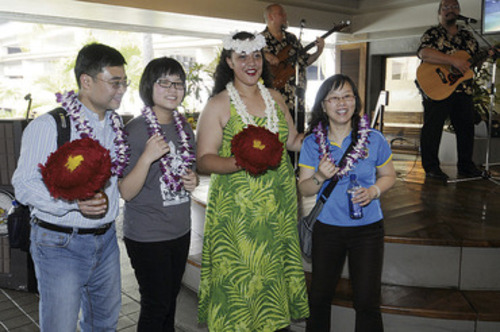 Hawaii’s tourism industry is excited about the first direct airline flights between Honolulu and Shanghai, which crack the door open to a new, potentially explosive growth market. The promise remains stymied, however, by the difficulty in Chinese travelers obtaining U.S. visas.

Of the 7.4 million visitors to Hawaii, only 56,000 came from China. That should increase with the new twice-weekly service between Shanghai and Honolulu by China Eastern Airlines — but could grow even more, were it not for the visa difficulties. Unlike Japan and South Korea, China does not qualify for visa waivers, and obtaining visas to the U.S. is cumbersome.

At most of the 222 overseas posts that the U.S. State Department operates, the wait time for in-person interviews is less than a week. The average wait time at the five posts in China is 48 days, including 64 days in Shanghai and 60 days in Beijing, according to the State Department.

“It’s a challenge,” said Mike McCartney, executive director of the Hawaii Tourism Authority. “We’re hopeful because the first set of charters that came over worked through that.”

“It’s a barrier, we know that,” said Angela Vento, Hawaii director of marketing and sales for Starwood Hotels & Resorts. “Until there’s a visa waiver, I think there’s still going to be limitation on travel. But the commitment that China Eastern has made, and the wholesale partners that are there to start this charter flight, we believe is a first step.”

Visa waivers, which allow visitors to travel to the U.S. for up to 90 days without having to obtain a visa, are based on the rate of refusal of a country’s visa applications. Those with refusal rates of 3 percent or lower qualify for visa waivers. The refusal rate of Chinese visa applicants has reduced from 24.5 percent in 2006 to 15.6 percent in 2009 to 13.3 percent last year, a rapid decline but still a long way to 3 percent.

“I think it’s a long process, and I think we’ll advocate that it’s an important step,” Vento said.

“It’s a complex situation and our State Department is on it,” McCartney said. “Over time, I think it’ll free up and get better, but in the beginning it is a very challenging process.”

The Travel and Tourism Advisory Board, a newly created 30-member industry group appointed by the U.S. secretary of commerce, recommended in February that the cutoff refusal rate should be raised to 10 percent. That could be attainable by China in a short time if its refusal rate continues to decline.

The advisory board recommended various measures to allow increased visitors to the U.S. by travelers from China. They include:

» Establish a maximum wait time of five days for in-person interviews for visas.

» Add four to six visa processing locations and a few hundred officers to process visas. It is estimated that one visa processing officer generates $1.5 million in fees a year, based on a fee of $140 per visa application.

» Allow non-immigrant visas lasting 10 years for Chinese visitors, which has been allowed in other countries.

“I absolutely support them (the recommendations) and I think we have an opportunity, especially with the new travel board,” McCartney said. “It’s the first time the United States has a board of this government caliber that can knock on the government on our end and their end, as opposed to individual states.”

“The new generation of affluent Chinese tourists coming to Hawaii since 2009 are generally Chinese businessmen, with a high personal income and a strong desire to spend money in Shopping in Hawaii’s luxury retailers”, said Pierre Gervois, CEO of China Elite Focus and a well known expert in destination marketing to Chinese tourists.

Sen. Mark Kirk, R-Ill., and Rep. Mike Quigley, D-Ill., have introduced legislation, the Secure Travel and Counterterrorism Partnership Act, that would use a country’s rates of overstaying visas in the U.S. instead of visa refusal rates. McCartney said he supports the measure, and President Barack Obama endorsed it in a letter to Congress in May as he visited Poland, which seeks membership in the visa waiver program.

“Using visa refusal rates as a primary requirement for admission is not a good way to determine whether a traveler represents a security, law enforcement or illegal immigration risk,” according to Jena Baker McNeill, a policy analyst of homeland security for the conservative Heritage Foundation. The overstay rate among countries with visa waivers is about 1 percent.

“We are all looking at this as an economic issue rather than a diplomatic or a security issue,” said Marsha Weinert, Hawaii’s tourism liaison during the Lingle administration. “You have different federal agencies that look at it a little differently. 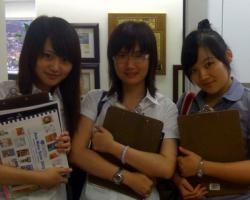 Three students attending the Macau University of Science and Technology have started a blog in Chinese about Hawaii.
Carrying cameras, cell phones, and with easy access to computers, Lou Jie (Jackie) and He Ping (Freda), originally from Shanghai, and Jiang Ji (Maggie) from the nearby province of Jiangsu, have already blogged in Chinese about their trip to the Polynesian Cultural Center, shrimp on a stick from Kahuku, the beauty of the islands, and other first impressions, being that this is their first visit to Hawaii. “After watching American Idol, we can see that Hawaii is different from the rest [of] America,” said Jackie. All three agree that they can understand why people want to come to Hawaii and what some of the roadblocks are for the Chinese.

The students are part of the AIPT (Association of International Practical Training) program, which has sent a total of 58 students from their university to the United States to get practical training. Twelve are in Hawaii.

Freda says China’s new and friendlier visa policies, enabling group tours to the US and advertising and promoting in China, will help with tourism to Hawaii from China. The students noted the friendliness of the people, good food, beautiful scenery, and flowers as things that stand out about Hawaii.