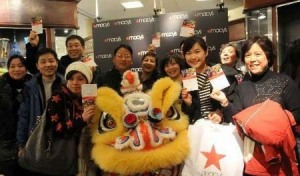 According to First Financial Daily, a tour group of more than a thousand Chinese tourists spent the Lunar New Year (Spring Festival) in New York. These tourists spent $6,000  dollars on average in U.S. during this trip.

The tour group was warmly welcomed in New York City. In front of Macy’s Department Store on New York’s 34th Avenue, the largest department store in the United States, hosted the largest ever tourist group from China. The group consisted of 1,000 Chinese from Beijing, Shanghai, and other major cities. To welcome the “thousand-person” tourist group, Macy’s invited a lion dance performance group and gave each Chinese visitor a special “international coupon” and small gift.

The vice president of Macy’s expressed his hope that more Chinese could come and visit the U.S. to go shopping. American stores have become increasingly interested in Chinese tourist groups because of their strong purchasing power.

According to the U.S. Department of Commerce, each traveler from China spent an average of $6,000 during his or her 8-10 day visit in the United States, 50 percent more than that of tourists from other countries spent during the same period. The “thousand-person” tourist group will contribute 6 million U.S. dollars to the U.S. economy. Chinese tourists have really brought vigor to the U.S. east coast business which is quite depressed in recent two years.

This tour group was jointly organized by NYC & Company, the U.S. Continental Airlines and several travel agencies in China and the U.S.

With many famous buildings and museums, New York has become the first choice for Chinese tourists traveling to U.S. cities. Among all Chinese tourists travel to the United States, 44 percent chose New York as a destination. In order to attract more Chinese tourists, NYC & Company has opened an office in Shanghai. According to Pierre Gervois, CEO of China Elite Focus, the famous Shanghai  PR agency  for affluent Chinese international travelers “Macy’s has a very smart strategy to attract affluent Chinese shoppers. The new generation of Chinese outbound travelers prefers to travel to NYC for their shopping, rather than to buy in Shanghai stores, with higher prices and not a wide range of products”

George Fertitta, CEO of NYC & Company said their staff at the office in Shanghai are always asked about the shooting location of TV drama Sex and the City by tourists preparing to visit the United States. “It is not impossible to organize a Sex and the City tour in New York conducted in Chinese.”

NYC & Company data show that in 2008 there were 9.5 million foreign tourists who visited New York City, among which 257,000 were Japanese tourists, more than the total number of visitors from Chinese mainland and Hong Kong (218,000). But in terms of per capita consumption, the Chinese mainland and Hong Kong tourists spent $2,148 in New York, about $400 more than Japanese tourists.